June 07, 2021
According to the Book Of BBQ all the faithful need toys, sorry tools, to further their enjoyment as well as increase the quality of the results of their BBQ worship. 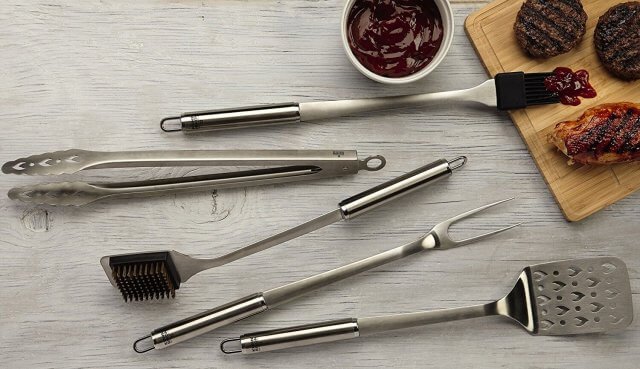 I've certainly had a great time putting all this information together as there's a number of items that I didn't have and could suddenly justify getting them.

Now, don't take any of the three classifications as gospel - everybody does different things and does them differently. If I've listed an item under the Nice To Have section but you know you need it - go and buy it ! 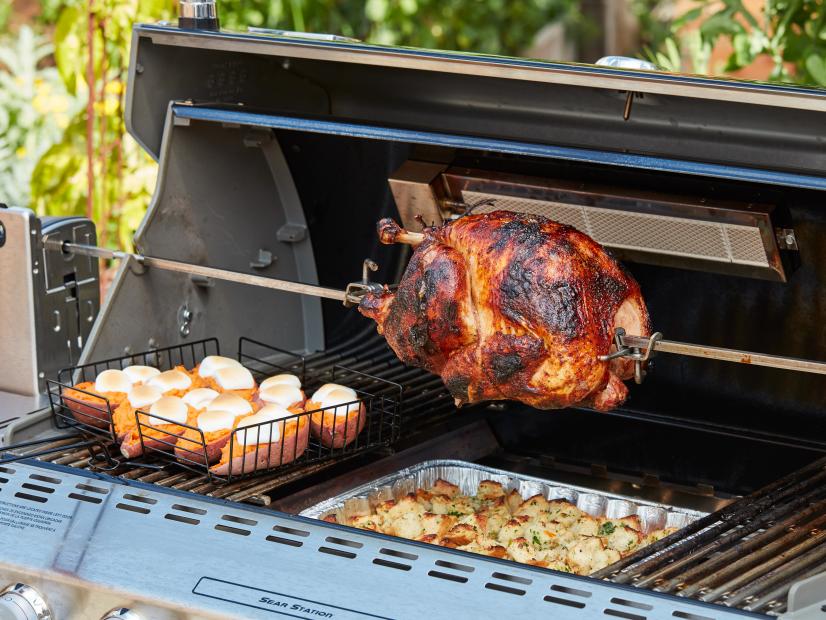 I have one of these for the hooded BBQ that I currently have, and in my opinion they are a waste of time and money.

It's quite a fiddly job to get the meat balanced on the spindle so that it spins correctly and then doesn't taste any better than if the item is simply roasted in the BBQ. On top of that the battery operated ones (such as mine) consume a lot of $$$ in batteries as even alkaline one don't last much longer than 1, maybe 2, roasts.

Take note, these comments are not about full size spit-roasters where the carcass is cooked over a wood/charcoal fire. Those things are great; but you really only tend to use them when there are a lot of people coming round as you need a lot of meat to make the effort worthwhile. Spit-roast kangaroo is magnificent, as is sheep and pig. 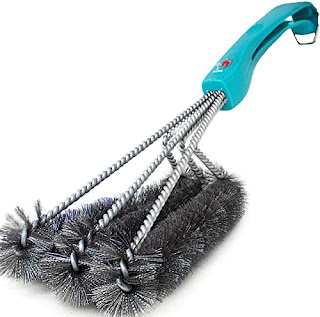 These are a handy tool if someone gives you one as a present or you feel that you need it. Many of them have a scraper blade built in as well, so they can be quite useful.

I have had one in the past and did use it however, it got lost when we moved to Derby, KS and I've never felt the need to get another one. I'm more than happy cleaning the grill with my simple paint scraper that doubles as a spatula.

You can get hand-held, motorized grill brushes in several parts of the world but it's still on my list of items to test. Will let you know when I've used one.

One tool I would stay clear of again is the scourer pad with a handle attached - the one I received as a Father's Day gift fell apart on it's second use.

Now, the only reason I don't have this in the "Essential" category is that I have a wok burner and the wok - otherwise this is an essential item.

I think we all acknowledge the need to eat our veggies however, the only salad that I am really partial to is a proper Caesar, which, unless I make it myself, never seems to appear at my BBQ's.

So grilled vegetable is the way to go and are certainly my first choice. I usually very coarsely chop onions, capsicums, zucchini, eggplant, mushrooms, and 2 or 3 lemon or orange quarters, and mix them in a bowl with a little olive oil, dried herbs and salt and pepper until they are coated all over, then grill them in the grill basket.

The juices and oil then drip onto the rocks or flame-tamer and come back as smoke, which adds great flavor of course.

It's also useful for handling smaller items such as prawns, scallops, or diced meat if you're not able/willing to put these onto skewers. 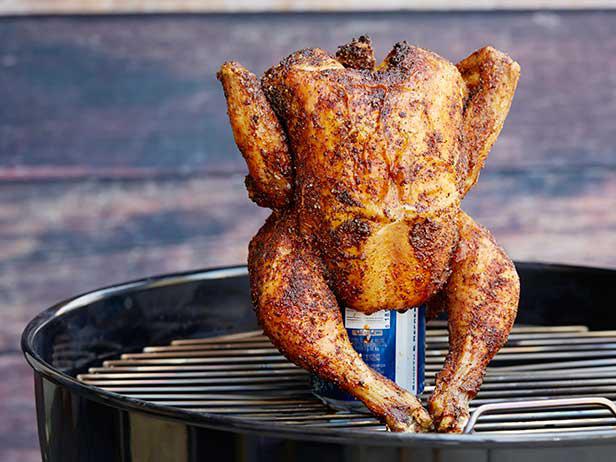 Source: Foodnetwork.com
Wow, weren't these things a revolution when they appeared on the market in the 90's ? Beer Can Chicken and Orange Soda Duck were all the rage.

Fortunately, the hype died down once the first few books were published and everyone realized that it was just another way of cooking poultry, albeit with a gimmick. Also fortunate for us is the fact that it is actually a very simple way to produce a very nicely cooked bird. I certainly like it.

The liquid in the can heats up in the BBQ and slowly boils off, thereby steaming the bird from the inside and imparting the flavour of the liquid used, while it still gets nice and crispy on the outside.

The only trick to this is to make sure that the can is only half full - a full can will not work as there is too much liquid to heat up in the time that the bird cooks.

Purists soak their wood chips in the other half before using them to create smoke, while everybody else simply drinks it.

This would be classified as an essential item if I used it more.

It's only occasionally that I get my act together to buy a pork belly and make porchetta, which is a shame as slow cooked dishes like this are simple ways of producing a great meal with a cheaper cut of meat.

This is a must have item if you do any type of rolled-roast or stuffed cut of meat. It's completely safe, natural, non-toxic, and probably the cheapest item associated with your BBQ.

Do I have one? Of Course ! Are they a luxury item - absolutely ! However, if you are frequently cooking large cuts of meat or whole birds, they are very handy.

Most models have temperature alarm which I find very useful because the larger cuts take quite a while to cook and once you've had a couple of beers and been talking to a few people, it's quite possible to forget about the meat. The alarm will go off once the meat reaches the temperature that you want to achieve.

The probe gets inserted into the thickest part of the meat, when you put it in the BBQ, and the cable then runs out the back or side of the BBQ to the main unit.

I still keep my handheld probe handy to check the temperature in 2 or 3 other spots before finally deciding that it is done to satisfaction, particularly in irregular shaped cuts of meat.

Wireless models are becoming available however, from everything I've read I do not think that the technology is quite refined enough yet. When I've tried one myself I will update this section. 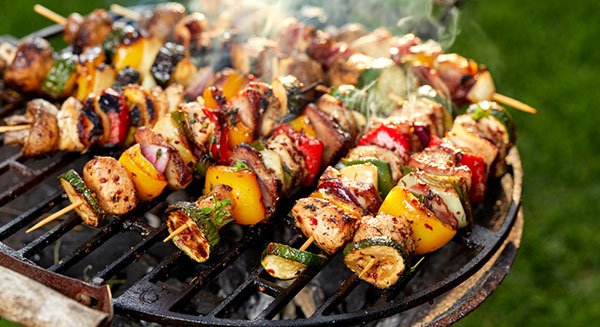 This is only listed as a "Nice To Have" because you can wrap your soaked wood chips in a few layers of aluminum foil and stab a few holes in it to achieve the same effect.

However, I like the steel box and it's what I use. Where you position it on your bbq grill depends on how it is designed. I remove the small plate and let it sit on the rocks, however, it works as well sitting on the open grill.

The process of smoking is discussed in depth elsewhere, so just remember to use wood chips of different sizes so that smoke is generated continuously rather than all at once.

Again, "Nice To Have", but very handy for reminding you that something is on the BBQ, when you're busy with a number of different tasks - drinking, talking, etc....

I use mine frequently when I'm cooking smaller cuts of meat that are not suitable for the Digital Thermometer Alarm because they are either too small or of a cut that makes it impractical.

All I'm going to say here is they are very handy as there is nothing else that should need explaining to you. If you don't like washing up, use the disposable aluminum foil variety. 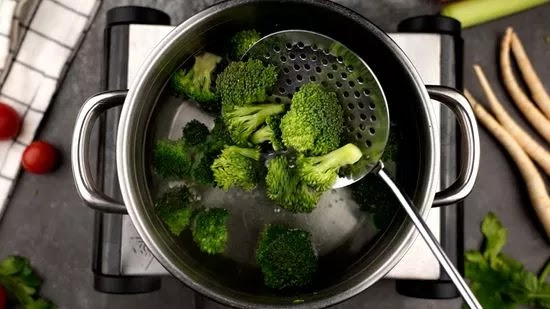 Source: Wikihow.com
Handy item for keeping bastes and sauces warm on the BBQ which is what I do with the small one pictured that I have as part of my BBQ arsenal.

You could use a bigger one for boiling/steaming veggies to go along with your meal. Whatever you do, make sure you get one with side and lid handles that won't melt, and if you can get a see-through lid as well so you can see what is going on in there without having to lift the hot lid all the time.

Caution: Whenever you are using this item on the BBQ, remember that the handles will be hot.


Next Article: Treadmill Selection - How to do it?
Location: Wyoming, USA

Popular posts from this blog

How to Pack a Backpack? 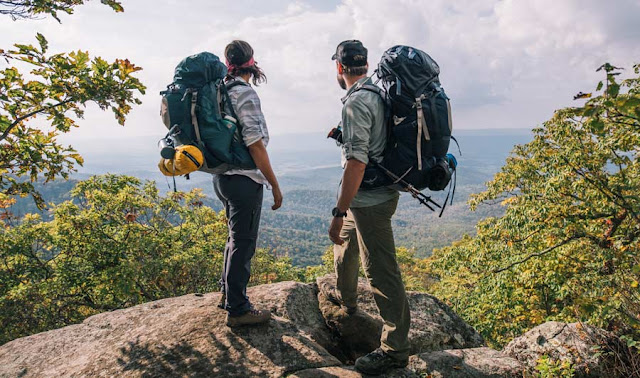 By reading the other pages on this site, you have been able to review the features and benefits of various equipment and supplies that you will need to take on your hike. Now, lets put it all together inside the backpack of your choice. Here are the equipment and supplies that you will have in front of you: Backpack Tent or Shelter Sleeping Bag Sleeping Pad Stove & Fuel Water Pump (or other purifier) Water Bottle(s) Map & Compass Flashlight or Headlamp Each Pack is Different Each piece of equipment packs differently. Therefore, we will have to discuss this subject matter in generalities. Sitting in the middle of your living room floor with all of your supplies in front of you is the best way to figure out how to pack a backpack. The size and style of your personal backpacking ensemble will determine the details. What NOT to Put in Your Pack Take out your hiking boots/shoes, water bottle(s), sunglasses, knife and an initial set of clothing and put in a se
Read more 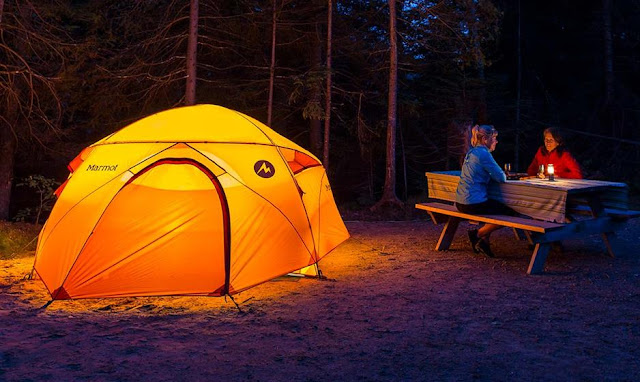 Great choice – there couldn’t be anything better to get really close to nature and explore the great outdoors. Being in and exploring the great outdoors is exhilarating. With any vacation you need to plan; camping vacations are no different but to say they should be more detailed. You wouldn’t want to arrive to find you’ve forgotten …. Oh no! The tent! Planning your trip should start with where you are going and what you are planning to do. When you and your family have decided this, a checklist can be prepared. It is wise to prepare the checklist well in advance as this will enable you to include most everything you feel you need. There are also many pre-designed camping checklists available. Some campers often plan a menu and take the required food for their entire camping vacation. Quite a few camping sites are now equipped with power so taking along a small refrigerator is a bonus if there is packing space available in your vehicle or trailer. Try to vacuum pac
Read more